Make a Santa to decorate your home this holiday season out of a potato chip can! This potato chip Santa is an easy craft to make with kids out of felt and pom poms (or cotton balls).

This is Dallin’s last year at home with me before starting kindergarten. I love that we have this time to spend together. Today we decided to make a fun Christmas craft to display in his bedroom. A potato chip can Santa! 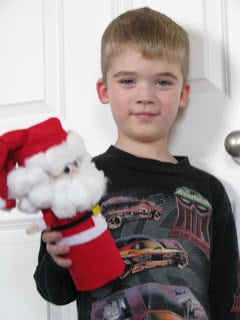 UPATE: We used a tutorial with a template back in 2008, but as of 2020 (when I updated this post) the site no longer exists. I’ve refreshed this post to include directions to make a potato chip can Santa without the template. The template was only for the felt strips that were used as the trim and Santa’s belt which are just skinny piece of felt, so you really don’t need the template to make Santa. It’s super simple to make without! You just need a few sheets of felt, cotton balls, and glue! We had everything already on hand which was an added bonus. 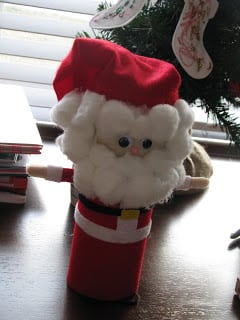 Tip: You can partially fill your can with dry beans or rice to make him nice and sturdy. Santa will stand up even without the extra weight, but it is a nice option. 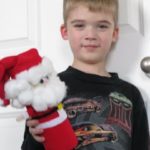 Print
No ratings yet

Make a Santa to decorate your home this holiday season out of a potato chip can! This potato chip Santa is an easy craft to make with kids out of felt and pom poms (or cotton balls).
Prep Time3 mins
Active Time10 mins
Total Time13 mins
Keyword: christmas, easy, felt, santa, santa craft
Yield: 1 Santa
Cost: $2

Note: you can use craft glue (Tacky glue) if you'd like. This is easier for kids to work with, but doesn't dry as quickly as hot glue. Tip: create templates out of copy or scrap paper to avoid mistakes when cutting the felt.